The Hofpleinviaduct is a raised railway track penetrating the city Rotterdam from the north, measuring 1,9 km. Underneath the raised Hofpleinlijn there are 140 arches, creating spaces used as offices and small business. In 2008 the Hofpleinlijn became a national monument and train traffic will soon be terminated. Randstad Rail will take over all the train business and the viaduct is being redeveloped. The Hofpleinlijn is a unique element in the busy city and was once one of the first railway tracks in the Netherlands.

Design the new Hofpleinlijn based on a decent observation and analysis, with a new vision on the whole 1,9 km railway track, including the surrounding suburban situation. A new urban strategy has to involve all the important relations with the surrounding and solutions for different problems.

N.B. This multiproject is the final project for the bachelor course Architecture Building and Planning, and will be finished by students from different fields, like building engineering, urban culture, computer aided design and architecture. Every project group will contain students from different disciplines. In that way students learn to discuss and work together as a team in an early stage of the design process. 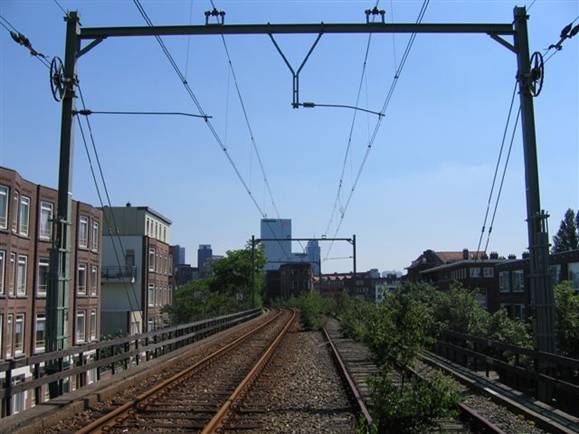 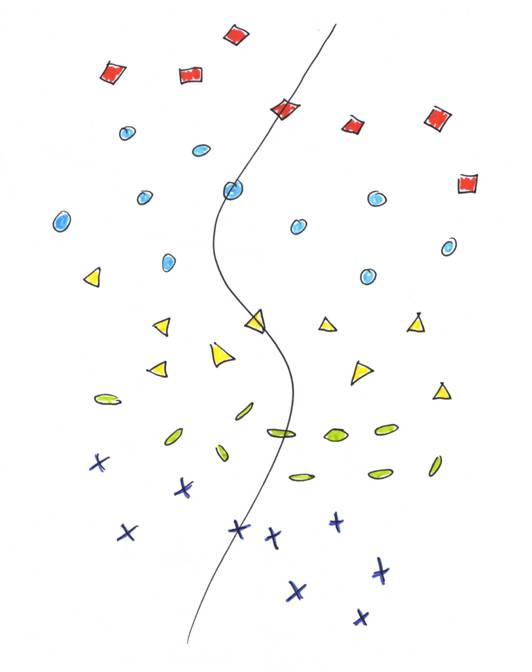 With this project we first started on urban level, analyzing the surrounding and existing situation. At the same time we tried to develop an attitude to handle the assignment, trying to line up all our thoughts. The vision on healthcare was an important basis in our project. 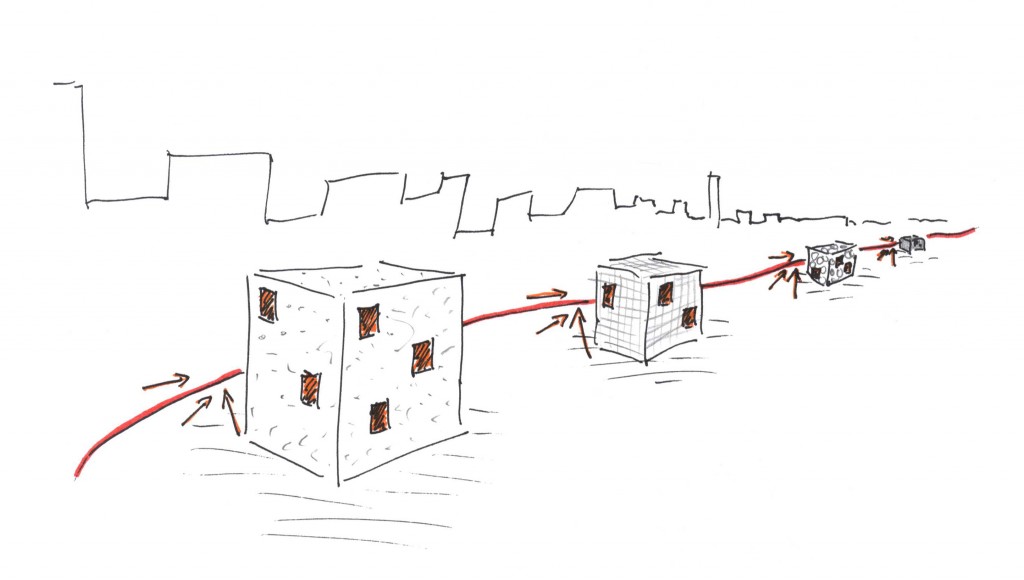 In the design the Hofpleinlijn is a unique element in the urban tissue of Rotterdam, creating two different experiences. The first is on ground level, where the busy streets and the chaotic life in the city dominate all your senses. The second experience is on top of the Hofpleinlijn, 6 meters above ground level, where the environment is surprisingly gentle and quiet, creating a very different view on the city. 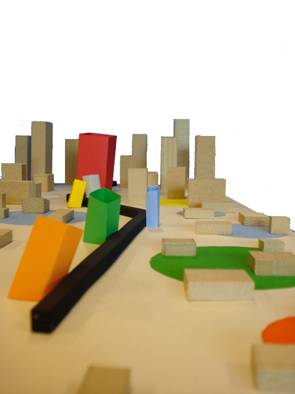 To preserve the special easy environment on top of the Hofpleinlijn (a very unique thing in such a big city), it is only possible to enter the viaduct in a few places. To involve inhabitants of the surrounding city, every entry will be designed to represent the mood that lives in the closest area. In that way every district has its own characteristic and recognizable entrance so people can identify themselves with a special place. This will be supported by the use of different materials and functions at each entrance. 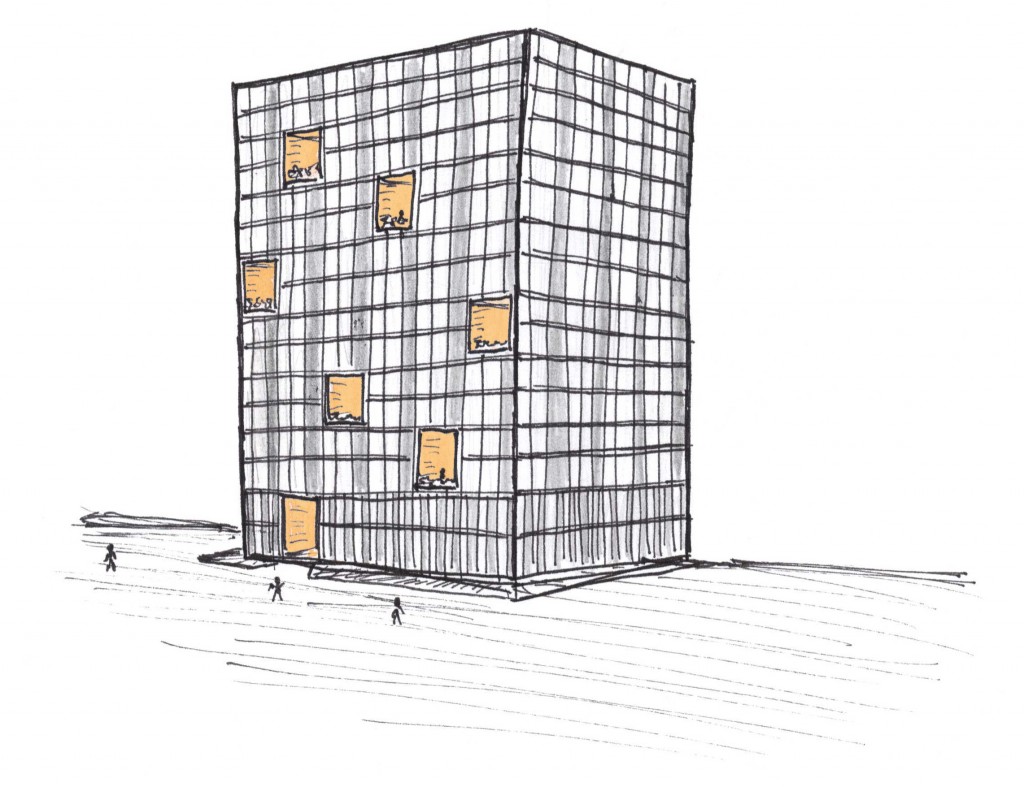 The connection between the project and the city is in an urban scale created by the design of a big square. There, big and wide staircases will invite people to enter the special world on top of the viaduct. 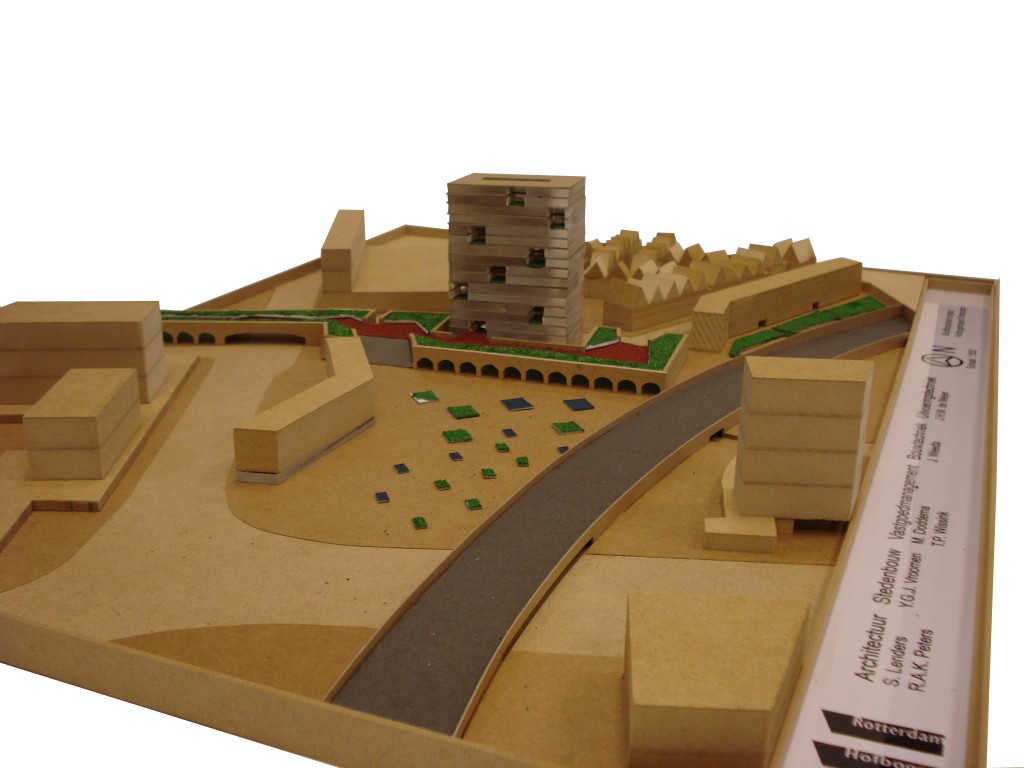 The public space on top of the Hofpleinlijn represents itself by an abstract interpretation of a railway track, a linear path where people can move through the different districts. This path will be accentuated by two white strips, combined with different kinds of color and materials between them. The space underneath the viaduct will be filled with public functions, mostly shops. Here, every section of the viaduct will show its own unique reflection on the character of the district, using district determined patterns, materials and colors. 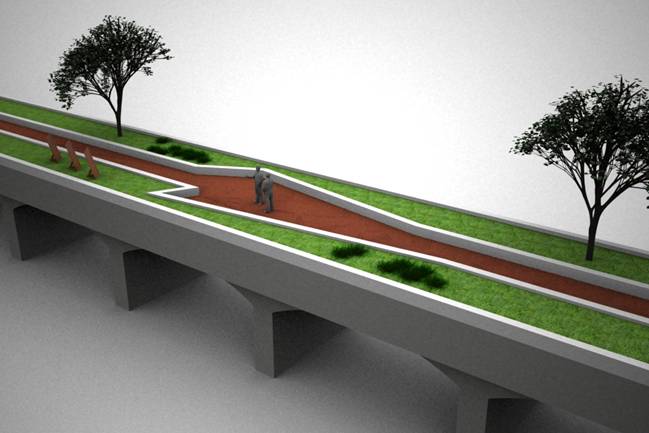 Vital for the design of the living and health complex was the concept of preventative healthcare. Preventative healthcare creates a high quality of living to reduce the chance of illness at an elder age. To model this concept in our complex, we created an “open” tower with a semi-public area on every floor; there the social aspect in being healthy is also very important. Every inhabitant of the complex has more light, air and space than an average building of this size. 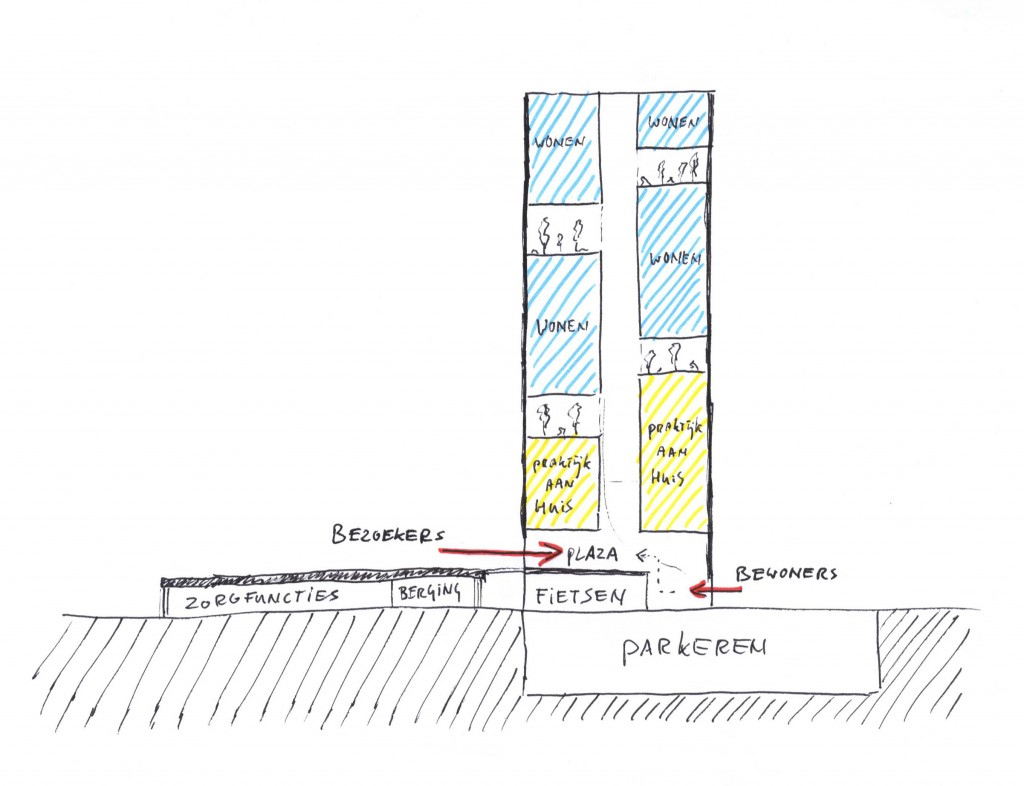 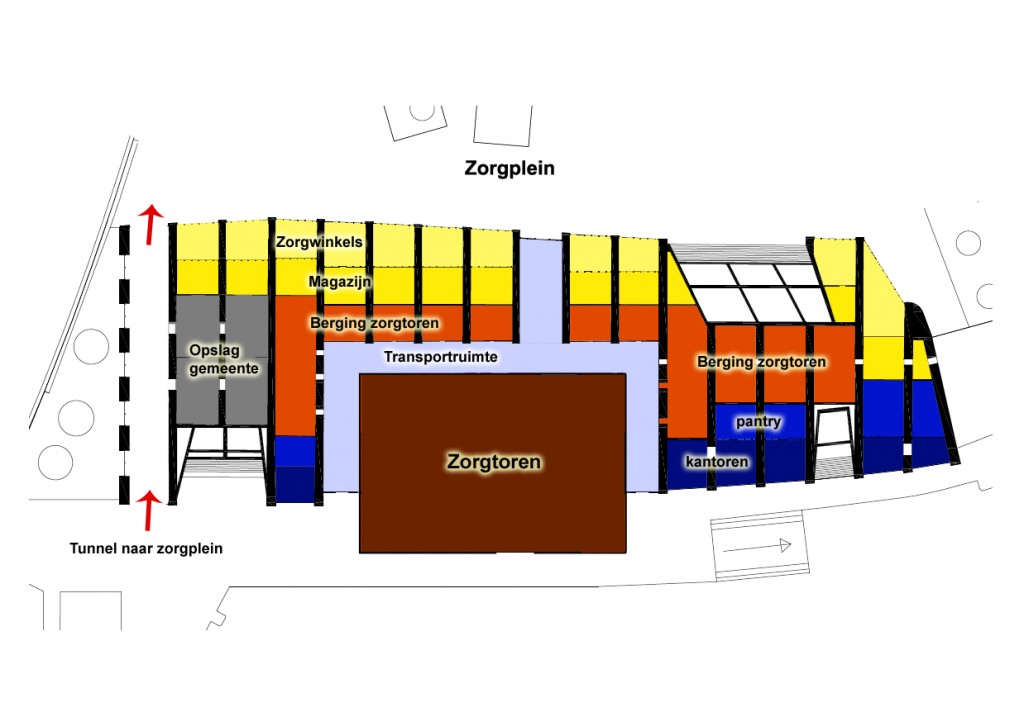 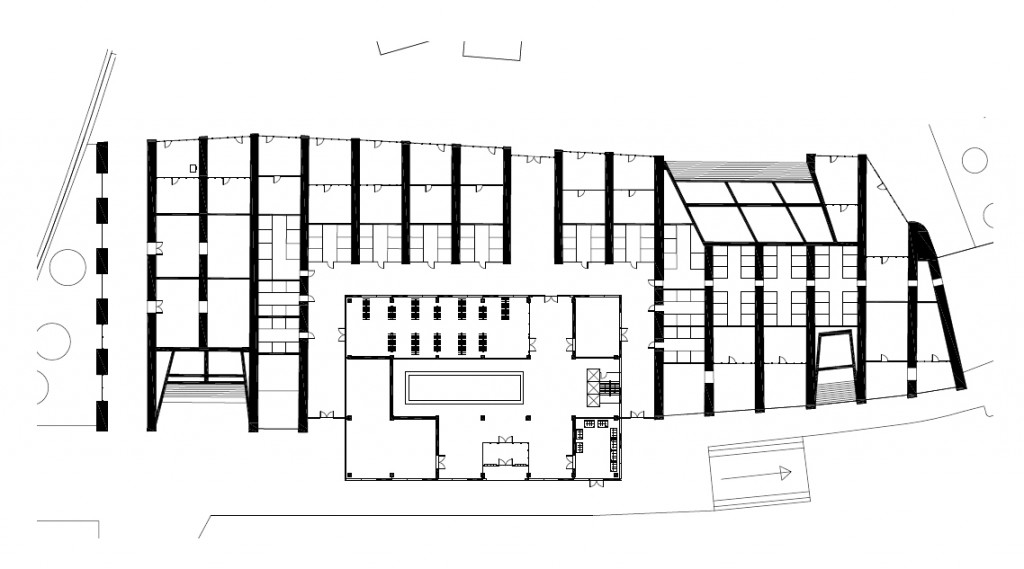 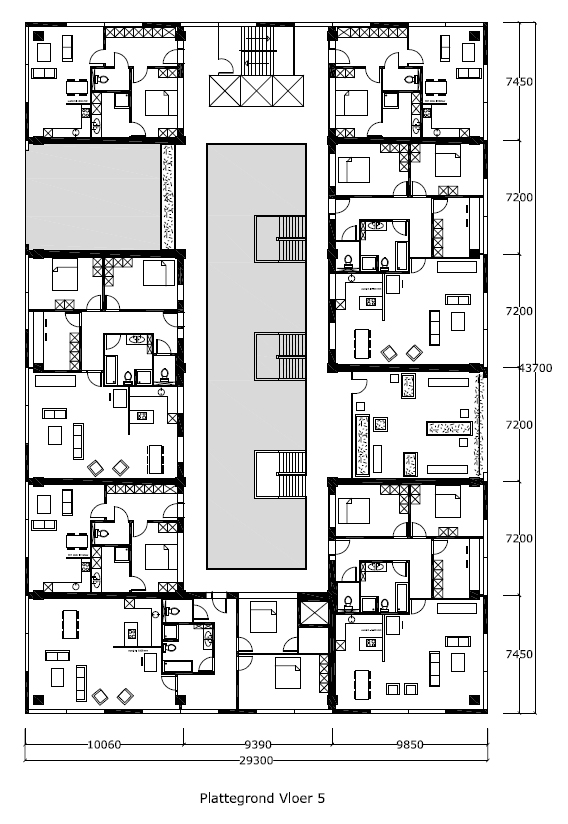 In this project we really needed to work together as a team to get an efficient and satisfying result. I really liked the part of thinking in concept about the urban situation and the best solution for the city as a whole. I think it is very important to take in account the environment and not only to focus on the project itself.

The multidisciplinary aspect of this project was very educative. It is very hard and takes much more time than normal to convince other designers of your way of thinking. You need to use very good arguments for every step you take and need to communicate every moment in the process. I think this project was a very good way to simulate the design process in the real world.